Like a lost answer on a hidden planet, St. George Energy was in need of help to improve asset management. As the fastest growing metro area in the United States with new meter installations happening every day, a solution needed to be found and fast. Cityworks and asset management was known in the city, but there was no focus, training, or plan to make it work.

In the dark times, work orders were created and moved around in a multi-step process, and electronic records were treated like pieces of paper only one person could see at a time. Many records were lost because of the inter-departmental movement of work. Even worse, the asset management system was viewed as a burden—something to do on top of everything else, rather than a tool to make work easier. Work tracking was a tedious task that provoked anger and fear. It was the dark side of work.

Then, a new crew of GIS and Cityworks administrators arrived in the power department to bring balance to the force—er, to the workflows.

Cityworks mobile native apps offered a new, straightforward way to work in the field and offline. But getting ready for the app would take careful planning, preparation, and retooling workflows. The first step was getting management on board. At the end of the day, there needs to be a push from someone who can enforce the issue when the going gets tough. In the case of St. George Energy, both the director and the meter reader manager were champions of the project.

The pilot for this project was a small group of meter readers, a scrappy team accustomed to field work and familiar with technology. They had reservations about the new direction, but they were willing to give it a try. The promise was simple: Work will be easier and faster in the field and accuracy of tracking assets will be infinitely better.

Next, the GIS team tackled the workflows. The old system had approximately 30 different work order templates with no clear delineation between inspections and work orders. As a result, crews often guessed which template to use and how to make it work. So, the team developed two simple and clear definitions. 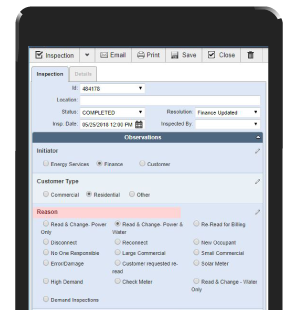 With an inspection, the asset is only reviewed or checked.

With a work order, something about the asset changes.

Inspections now have only two templates. The meter inspection template is used for all field work that requires a visual check. The test template keeps track of any testing results. If, during an inspection, a meter reader finds something about the meter that needs to be physically changed, she can simply create a child work order right from the inspection.

Balance in the Force

When the app was finally introduced for field use, all the hard work was already done. The clarification of workflows and reduction of templates inspired confidence among field crews. Focusing on the end goal and injecting hope and confidence into every team became an ongoing part of the journey.

Thanks to of superb leadership support and a team willing to stay positive and keep failures from being a source of discouragement—or worse, apathy—the 9-month journey to a new hope of good data became a reality.

Schedule a demo to learn how the Cityworks platform can transform your workflows in the field.