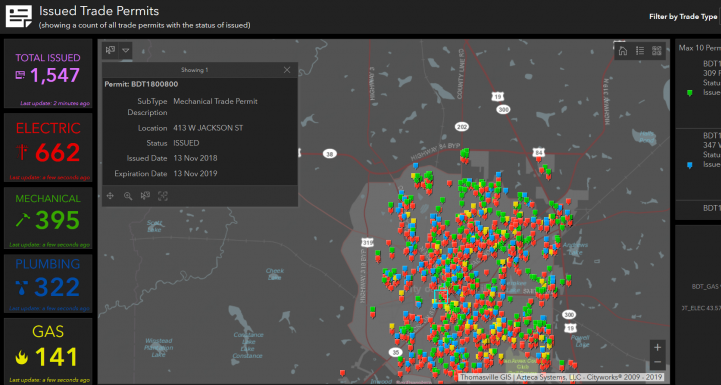 Bridging the Gap Between City Departments

How many times have you seen crews tear up a newly paved road for a water main replacement? This classic example of inefficient project planning is a common problem in communities across the globe. Employees at the City of Thomasville, Georgia, found a solution by building bridges.

These bridges are not made of steel cables and concrete. Rather, they are made of data. The architectural foundation for these bridges is Cityworks and ArcGIS, and together these technologies are closing the communications gap between city departments.

“City departments run independently in many ways, much like an island. We plan and work on our daily tasks and respond to the customer needs specific to that department,” said Chris White, executive director of public utilities. “We needed a way to bridge departmental islands and improve project coordination.”

Staff at the City of Thomasville have been implementing Cityworks PLL and AMS in small, manageable chunks since 2016. The first phase focused on the departments involved in the building permit process: building, engineering, and planning and zoning. The second phase expanded Cityworks to the gas, water, wastewater, and engineering departments. The third phase, which is ongoing, will include public works and engineering.

“The building department was the only agency using this system, so our communication with engineering and planning and zoning consisted of checklists in a folder, phone calls, emails, and Excel spreadsheets,” said Mark Harmon, chief building officer. “The process was cumbersome and unreliable.”

During the first phase of implementation, the project team developed PLL cases that incorporated workflows from the building, engineering, and planning and zoning departments. It was a seamless process to translate current workflows into a digital platform. Each department added its own procedures—such as documenting significant conversations with applicants—so everyone could maintain situational awareness of the case.

The Cityworks PLL cases did more than just replace the old checklist folders. They significantly reduced redundant emails and phone calls between departments, and they empowered staff to easily run reports and access information at the push of a button.

“The engineering department is responsible for maintenance activities within city rights-of-way and delivery of infrastructure improvement within those rights-of-way,” explained Wayne Newsome, city engineer. “The city owns and maintains most of the utilities occupying our street rights-of-way, so it’s vitally important that utility infrastructure work is properly coordinated and scheduled in advance of planned street improvements and resurfacing projects.”

The CIP case captures major project milestones, from concept development to final infrastructure updates in the GIS. The workflow incorporates the utility review process into the plan design process to help the utility and engineering departments eliminate conflicts and plan associated work.

Now, both departments have one central location for CIP information, where they can easily access the status and associated work for any given project.

Communicating a common operating view across an organization does not mean using only one interface to view the data. The GIS-centric nature of Cityworks makes it easy to externalize data to share outside of the platform.

The City of Thomasville uses Esri solutions, like Operations Dashboard and the web app builder, to consume Cityworks data, map services, and shapefiles via enterprise URLs (eURLs). By using eURL and Operations Dashboard, the city’s code enforcement officer can view the number and location of active cases by type. Similarly, the chief building officer can easily view a dynamic summary of all active trade permits or residential and commercial permits. eURL expands the value of Cityworks data by allowing increased flexibility in sharing information across the organization and community.

At the early stages of implementation, city staff developed benchmarks for measuring return on investment over a 10-year period. These ROI categories include paper reduction, business process efficiency, work order efficiency, and the elimination of software platforms. So far, the City of Thomasville has eliminated the use of one legacy software, and they plan to discontinue support for another system at the end of 2019.

In terms of business process efficiency, the city knew its employees were spending nearly $25,000 on 14 development projects using a siloed software platform and a paper folder to track staff input. By eliminating these inefficiencies, the city expects to see a 30 percent increase in employee productivity and a cost savings of approximately $7,500.

The city also calculated that the water, gas, and wastewater departments were spending 456 hours each year looking through paperwork to find work history data. With the implementation of Cityworks, the city estimates a 25 percent efficiency gain with a cost savings just under $20,000.

Based on the current project schedule, the city expects to achieve ROI after just three to five years of using Cityworks.

The success of each of these implementation efforts ultimately lies in the hands of the end users. City employees who use the technologies every day play a critical role in customer service, process improvements, and operational success. The city’s mission statement is to “create and deliver exceptional service to our community through a culture of safety, courtesy, professionalism, and efficiency,” and the departments are staffed to do just that.

With the help of Cityworks and ArcGIS, the employees at the City of Thomasville will continue to improve communication and build bridges citywide.

Eve Geyer is project manager and Duane Treadon is GIS director at the City of Thomasville, Georgia.